Why Rhode Island and Newport?

Guaranteeing the legal right of religious freedom, along with the separation of church and state, stand among America’s greatest inventions. In 1663, King Charles II of England granted the Charter of Rhode Island and Providence Plantations, making the colony the first political entity in the modern world to legalize these rights. Charles called the new colony a “lively experiment” in religious tolerance, but hoped it was so far away that it would not influence his regime at home.

The existence of a New World settlement where religious freedom and separation of church and state were the law of the land attracted peoples from both sides of the Atlantic. Soon the moral and economic worth of safeguarding these rights became widely known. The esteem in which they were held is perhaps be best measured by the high rank they were given in America’s Bill of Rights, which was adopted in 1791. Amendment one begins with what have come to be known as the “religion clauses.”

Congress shall make no law respecting an establishment of religion, or prohibiting the free exercise thereof…

In plain words, this means that each American of any faith or belief has the constitutional right to worship and believe, or not believe, as each of us chooses. Because these words come first in the Bill of Rights, many people consider religious freedom America’s “First Freedom.”

Exhibits throughout the Loeb Visitors Center celebrate this opening chapter of American history and the journey to legalize religious freedom. 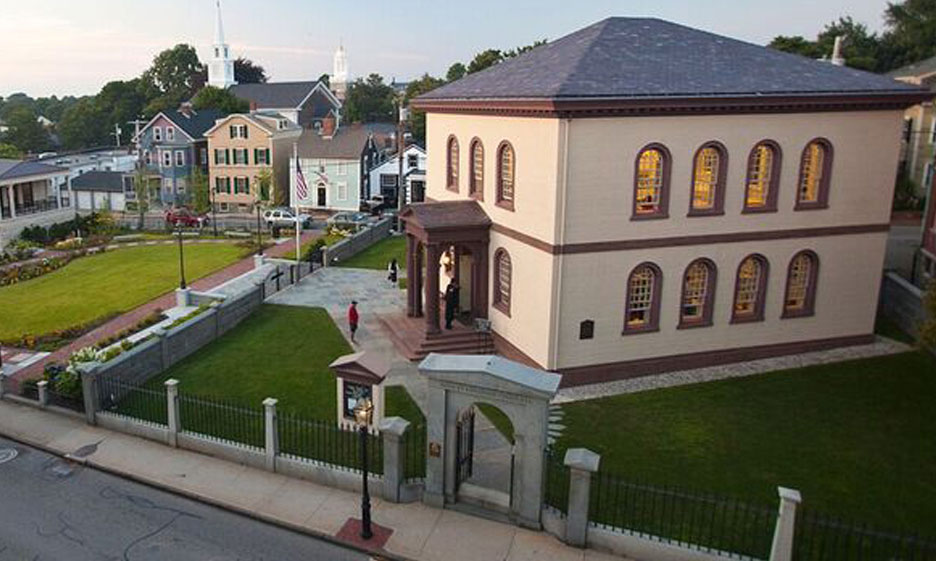 No person within the colony at any time shall be in any wise molested, punished, disquieted, or called in question for any differences in opinion in matters of religion, and do not actually disturb the civil peace of our said colony.

Newport’s openness drew many religious sects. By the time of the American Revolution, Newport was home to a diverse community of denominations, including Anglicans, Quakers, Jews, Seventh Day Baptists, Baptists, and others. The visiting Irish philosopher George Berkeley wrote in 1729: “Here are fewer quarrels about religion than elsewhere. The people live peaceably with their neighbors of every persuasion.”

Notably Newport’s physical design reflects this attitude of religious equivalence held by its residents. Unlike many New England towns, no house of worship dominates the original town square, now called Washington Square. The Quaker Meetinghouse, First Baptist Church, Episcopal Church and Touro Synagogue are built nearby, but not directly on the square. Similarly, few of Newport’s colonial houses of worship, including the Touro Synagogue, bear any outward architectural elements or symbols signifying their denomination.

Colonial Jews and other religious minorities in Newport and Rhode Island lived within a complex and contradictory framework of laws and practices regarding religion and civil rights. For example, Jews were free to organize, worship and practice according to their historic rituals. They were able to conduct business, travel, live wherever they chose in the community, and contribute to civic life, as long as their actions were seemly and appropriate to community values. But they were not able to vote, serve on juries or hold public office unless they converted to Protestant Christianity and met other requirements.

When Portuguese-born Jewish merchant Aaron Lopez applied to become a naturalized citizen in Rhode Island in 1762, the colonial government rejected his petition. He established residency in neighboring Massachusetts where he was able to obtain citizenship under British law. As was law at the time, once a citizen in one English colony Lopez was then able to enjoy the rights of an English citizen in Rhode Island.

Despite these civic and political restrictions, Rhode Island and Newport serve as rare examples of free expression of religious faith in colonial society. Rhode Island’s commitment to religious liberty showed the rest of the country that a diverse society was not only possible, but could be a source of strength that could grow stronger as the same freedoms were extended to all.